Welcome to Europe, 2021... The euro is still circulating, though banknotes are now seldom seen. (Indeed, the ease of electronic payments now makes some people wonder why creating a single European currency ever seemed worth the effort.) But Brussels has been abandoned as Europe's political headquarters. Vienna has been a great success. 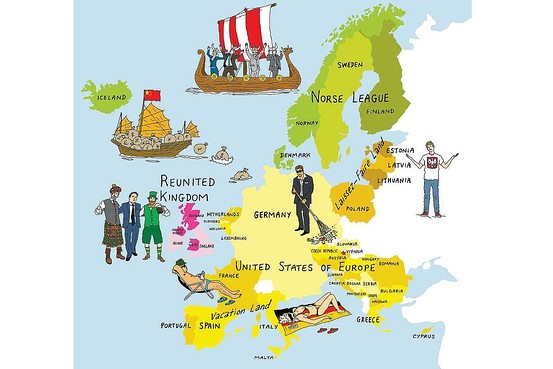 "There is something about the Habsburg legacy," explains the dynamic new Austrian Chancellor Marsha Radetzky. "It just seems to make multinational politics so much more fun."

It was fitting that the disintegration of the EU should be centered on the two great cradles of Western civilization, Athens and Rome. But George Papandreou and Silvio Berlusconi were by no means the first European leaders to fall victim to what might be called the curse of the euro.

Since financial fear had started to spread through the euro zone in June 2010, no fewer than seven other governments had fallen: in the Netherlands, Slovakia, Belgium, Ireland, Finland, Portugal and Slovenia. The fact that nine governments fell in less than 18 months—with another soon to follow—was in itself remarkable.

Another thing no one had anticipated in 2011 was developments in Scandinavia. Inspired by the True Finns in Helsinki, the Swedes and Danes—who had never joined the euro—refused to accept the German proposal for a "transfer union" to bail out Southern Europe. When the energy-rich Norwegians suggested a five-country Norse League, bringing in Iceland, too, the proposal struck a chord.

As Mr. Draghi said in an interview in December 2011, "The euro could only be saved by printing it."

Mr. von Habsburg—still known to close associates by his royal title of Archduke Karl of Austria—could justly feel proud. Not only had the euro survived. Somehow, just a century after his grandfather's deposition, the Habsburg Empire had reconstituted itself as the United States of Europe.

Small wonder the British and the Scandinavians preferred to call it the Wholly German Empire.