At the time of writing this report it has become clear however that the economic crisis has left few higher education systems unaffected. While institutions in most countries still report being faced with uncertainty and expect further - and possibly deeper - cuts to come in the forthcoming months and years, some countries, such as the United Kingdom, prove that cuts are likely to have a significant restructuring effect on higher education systems around Europe. As other governments struggle with austerity measures and balancing their deficits, the full extent of effects on higher education systems around Europe still remains to be seen. Furthermore, the cuts in public spending tend to hit higher education budgets with somewhat of a delay as a result of different budgeting periods, which will make further monitoring and in-depth analysis essential. 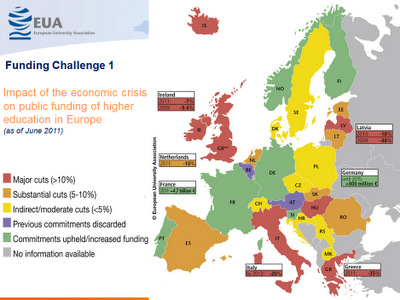